Transfer an annuity into my Solo 401k

How do I transfer my IRA annuity into my Solo 401k?

An annuity is simply an investment of an IRA. IRS rules allow you to transfer any IRA (except Roth) into your new Solo 401k plan.

In order to do so, you will need to contact the company holding your annuity and sell or liquidate it. Then you can simply request a Direct Rollover of your IRA into your Solo 401k plan.

The rollover instructions and form are located here:

Can profit sharing contributions be made to my Solo 401k throughout the year?

Can profit sharing contributions to my Solo 401k be made throughout the year, or do I have to wait until the end of the year to make them?

Should I do a direct or indirect rollover into my Solo 401k?

Direct rollovers are strongly recommended for funding your Solo 401k.

Direct rollovers are non-taxable events.  The payment is made directly from one retirement plan to another.

While indirect rollovers may be possible, they are not recommended since they can lead to an IRS inquiry on rollover funds.  In an IRS inquiry, you as the Solo 401k plan participant would bear the burden of proving that the funds were rolled over, without the benefit of a form to officially document it.

*Note that Form 5498 cannot be used to document an indirect rollover into a 401k plan.

If the participant rolls the funds over to an IRA, the receiving IRA custodian would be required to report the receipt of the funds through Form 5498.  This would serve as documentation that the funds were rolled over into another plan.

However, Form 5498 is not applicable for 401ks.  There is no form for a 401k to report the receipt of rollover funds and thus document that the funds were rolled over into the 401k.  Form 5498 is only applicable for IRAs.  The form would not apply for a Solo 401k.

What happens when my spouse stops working for my business?

If you and your spouse work in your business together and your spouse stops working in the business, (s)he can still participate in the plan in terms of directing their existing assets in the plan. Your spouse has all the rights of the participant except the ability to make contributions into the plan.

Your spouse does not need to transfer their funds out of the plan and stop being a participant. However, (s)he can not make contributions.

Can my wife transfer her 401k from a former employer to my Solo 401k plan?

However, your wife can participate in your Solo 401k if she is also employed by the business. If she participates in the Solo 401k, she can have her own participant account.  She can then rollover her IRA or 401k into her own account under the same Solo 401k plan.

Can I rollover a foreign pension plan to a Solo 401k?

I have a UK personal pension. Essentially, it’s the same format as the 401k. Do you have any experience/information on if and how I could roll that into my Solo 401k?

Foreign pension plans cannot be rolled over to a U.S. IRA or Employer Plan.

Is it correct that a Solo 401k only allows me to contribute based on my self-employment income?

Yes. The Solo 401k plan is an employer-sponsored plan. The employer is the plan sponsor which you used to adopt the plan.  This is your self-employment, either you as sole-proprietor or a business entity (LLC, corporation, etc).

All contributions to your Solo 401k must come from the business earnings of your self-employment. You cannot contribute any additional funds from full-time employment W2 wages elsewhere or any other funds not related to the sponsoring entity.

In additional to large contributions limits from your self-employment income, you are able to roll over existing funds from other qualified retirement plans such as a Traditional or SEP IRA, 403B, 401k, etc.

Contributions from my corporation

Can you please explain how to make contributions to my 401k from my corporation. Can I get paid by the corporation as an independent contractor via 1099 and then claim the state taxes on my personal return or do I need to do the payroll deductions and submit them to the state?

Since your 401k plan is sponsored by the corporation, all employee elective deferrals must be made through the payroll. Profit sharing contributions are made by the company and are 100% deductible. Since you own a corporation you must take reasonable salary, please consult your CPA or tax advisor for details. Be sure to inform your payroll service provider (payroll company or your CPA) that you intent to make contributions into the 401k. Contributions made by the employee must be reflected on the payroll and the funds must be deposited to 401k account within 7 days of payroll. 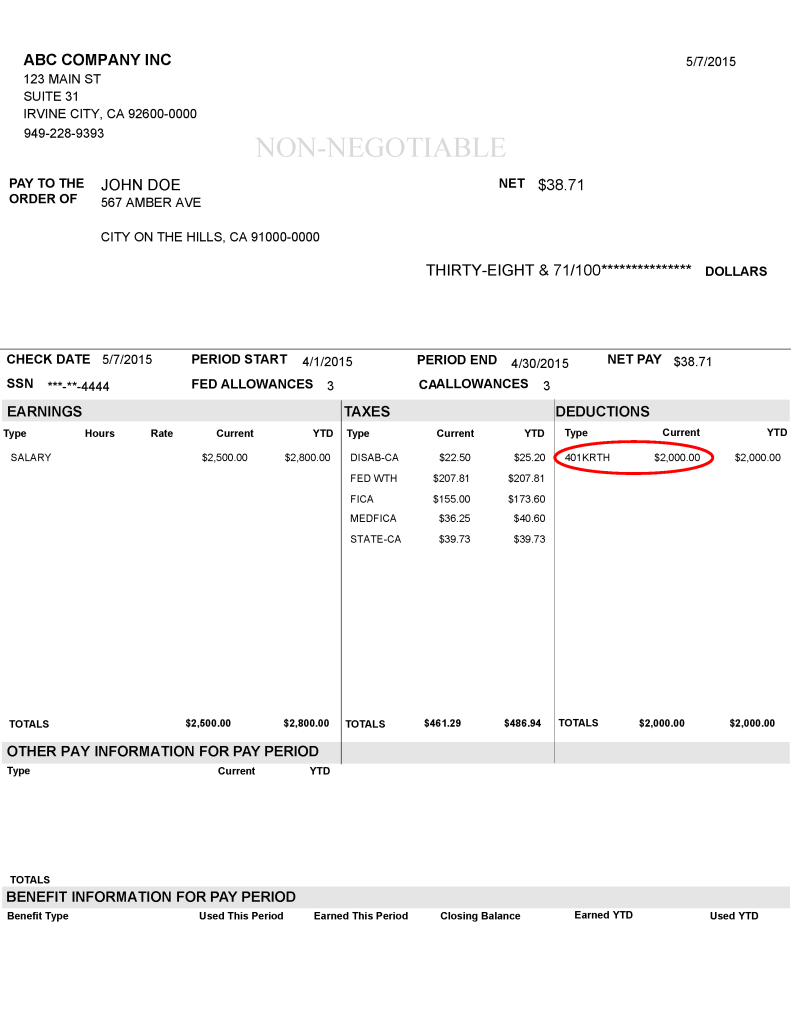 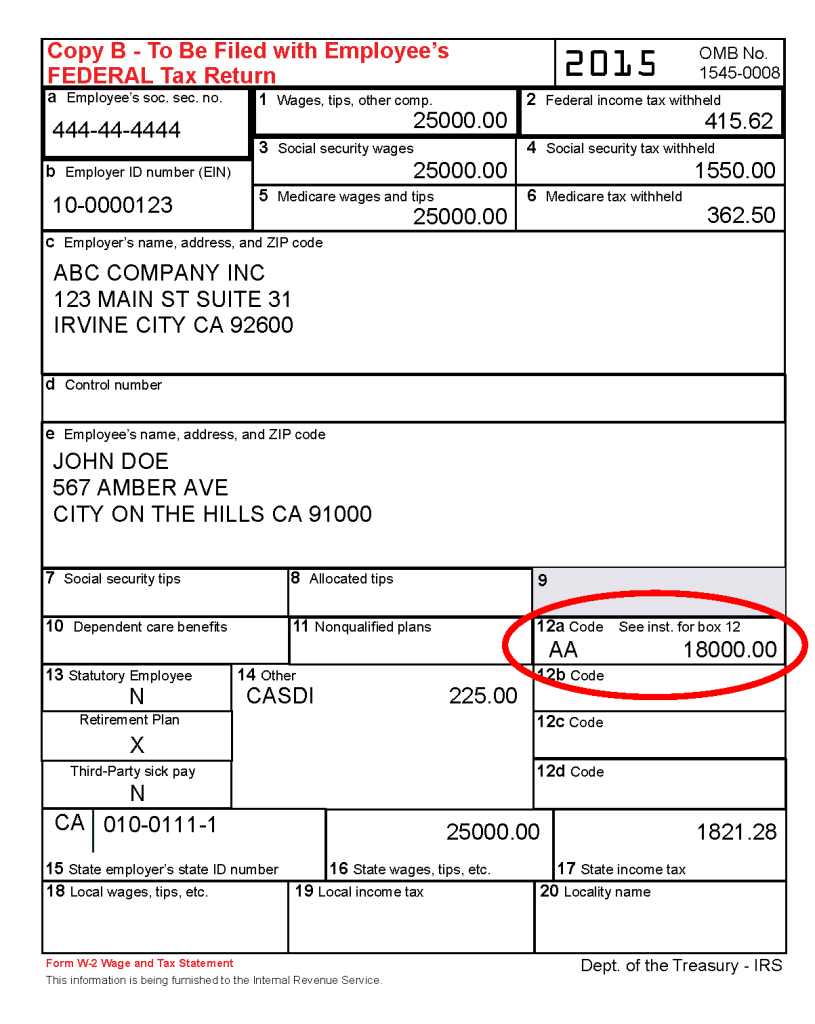 When I set up my Solo 401k, I contacted my custodian to request a direct rollover from my existing IRA into my Solo 401k. Now the custodian sent me Form 1099-R for the rollover. Is this correct? If it’s reported as a distribution, how do I correct it?

When you request a rollover, the custodian reports the transaction to the IRS by issuing Form 1099-R.

First, check the 1099-R to make sure it was completed correctly.

Code G is for a “Direct rollover of a distribution to a qualified plan.” If the custodian entered “0.00” in Box 2.a. for the taxable amount and “G” in Box 7 for the Distribution code, they are telling the IRS that a direct rollover was performed and it was a non-taxable event. This is correct.

If the 1099-R was not issued correctly, the custodian either did not process your request for a direct rollover correctly or misreported it on the 1099-R.

Note: IRS Form 5498 cannot be used to correct this error as it is not applicable to direct rollovers into a 401k.

Form 5498 is used for an indirect or 60-day rollover, in which a distribution is taken from your IRA and then deposited into another IRA within 60 days. This form is not applicable for the 401k and for direct rollovers. It is only applicable for IRAs.

Contributions to both SEP and Solo 401K in the same year

Does the IRS allow contributions to both SEP IRA and Solo 401K in the same year?

Yes, you may contribute into the SEP IRA and Solo 401K plan in the same year. However, you cannot exceed limitations of contributions in total.